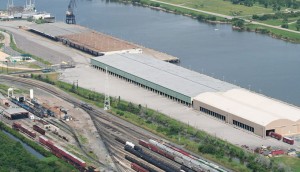 The arrival of Pure in Port Arthur is not only a huge boost for job creation; it begins the process of diversifying the local economy away from the petrochemical industry.

The decision by Pure to locate its global launch facility in Port Arthur is indicative of the economic and technological emergence of the south-east Texas region, as well as the importance of the leading educational institutions located in the city that provide crucial training. Pure is thus creating a culture of entrepreneurship that will put Port Arthur on the global map and inspire others to build businesses in the region too. European CEO spoke to Floyd Batiste, CEO of the Port Arthur Economic Development Corporation, about what this means for the city.

How will Pure transform the local economy in Port Arthur?

‘Game changer’, ‘transformational’, ‘monumental’ and ‘landmark’ are some of the terms I would use to describe the announcement that Pure will build a textile and manufacturing facility in Port Arthur. Pure is expected to create 500 direct jobs and pump $260m in capital investment into our local economy. It certainly will change the economic and educational landscape of Port Arthur forever.

Within the last ten years, Port Arthur has seen exceptional economic development, due to the construction of three LNG facilities, and the expansion of Valero and Total, as well as that of Motiva Enterprise, which is now the largest refinery in North America. As a result, many large companies, such as MPW, Tyco Willfire, Setpoint and Lockwood International, have since relocated or established offices and shops in Port Arthur.

CNN Money ranked the city first for percentage of new jobs created. How was this accomplished?

The trend of expansion in the petrochemical industry began five or six years ago, as emerging markets in India, China and Brazil began to tip the supply and demand scale. In 2007, Motiva expanded its refinery, which more than doubled its production capacity and created 300 new permanent jobs. In 2008, Valero began the company’s largest-ever capital investment project, a $2.4bn expansion at its Port Arthur refinery, which generated up to 1,500 new construction jobs. Then, in 2011, Total Petrochemicals invested $2.2bn and had around 2,200 people working on the project.

How is setting up made cost-effective for businesses looking to move to the area?

On-site and classroom training programs are provided by the Port Arthur Economic Development Corporation, in partnership with the local Community College, Lamar State College Port Arthur, Port Arthur ISD and the local Workforce Solutions. In addition, the city’s One-Stop Shop consolidates the process of land development into a single location, acting as the primary intake and payment point for building permitting, most licensing applications, and over-the-counter construction permits.

What do the city’s business parks offer for investors?

The Port Arthur Business Park has easy access to the I-10 interchange, which connects to all of the major interstate trucking routes, while a regional airport serves most major cities in the US and the rest of the world.

In order to entice development that is compatible with the community’s goals and objectives, the Port Arthur Economic Development Board has undertaken an aggressive programme for infrastructure and amenities development. This strategy aims to provide high quality industrial and business park sites to prospective developers and tenants, which will support existing interests, as well as diversify the area’s economic base.

What challenges has the city faced in fostering economic development and how were they overcome?

Despite a surplus of workers, there are currently many job openings that cannot be filled because of a mismatch between the required skills and those available in the local workforce. Although there is a high demand for metalworkers and welders, for example, there are simply not enough skilled workers to fill these jobs.

In response, the Port Arthur ISD is actively creating a curriculum that ensures students are ready to join an innovative, 21st-century workforce when they graduate. Additionally, the Community College has implemented a workforce training department, which is partnered with local businesses. Our goal is to continue tackling these challenges in ways that achieve long-term, sustainable economic growth, as well as create new jobs and new capital investments.

Get The Visitors Guide

There is plenty to do in Port Arthur and the surrounding areas. Click the following link to visit the Port Arthur Convention and Visitors Bureau to get your copy of the newest visitors guide.